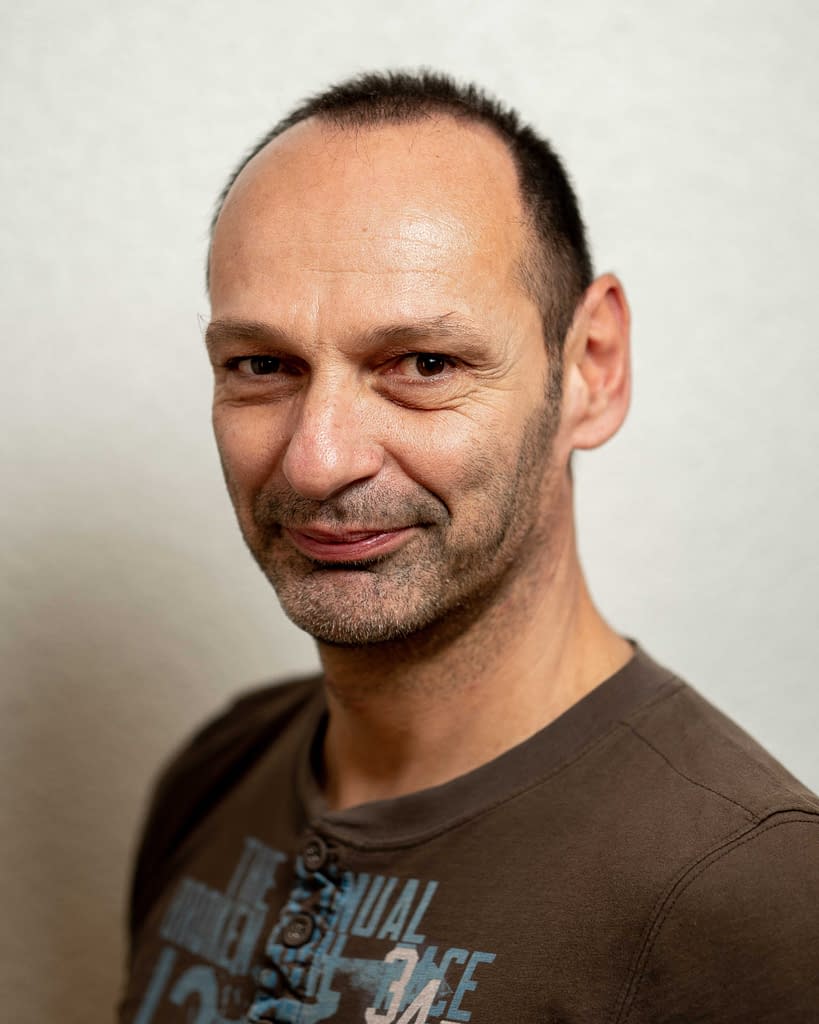 Georgios Antonopoulos was born in Olympia, Greece. He started dancing from a very young age, and has been a part of various greek dance groups. With EL.KE.LA.M he participated in numerous festivals around the world, acquiring numerous prizes, studied traditional greek dances and took part in educational seminar and conferences. At the same time, he graduated from the national conservatory of Athens. Later in Paris he studied classical ballet and modern dance.

He worked for more than 10 years, as a professional dancer at Duna Art Ensemble, where he mastered the art of Hungarian folk dance and got familiar with a wide range of dance styles from the Carpathian Basin. At the same time, he transferred his knowledge of Greek dances to the members of the Ensemble. He also participated in contemporary dance productions and he is also involved in balkan, contemporary and theatrical dance.

He has taught greek dances in the Hungarian state dance academy, Hungarian and generally balkan dances in several countries of the world such as France, Hungary, Spain, Germany, USA etc..

Evangelos Tzemis, born in Athens, Greece has been a member of El.ke.la.m. Dance Ensemble since 1996, through which he had the chance to come into contact with the performance art. He has traveled extensively around the world for international dance festivals and competitions where he and his colleagues have been repeatedly distinguished with prizes and awards.

During his MSc studies in Copenhagen he has been a member of Crihalma dance ensemble, a group of talented Danish people, who are passionate in Balkan dances and choreographies. Vervatidis Padelis and C.H.E.F. in Geneva was his next stop, during his working period at CERN. For a whole year, he was a member of the group, instructing and arranging the choreographies on a regular basis.

As a Dance Instructor, he shares a model of incremental movement learning, with which even really amateurs can learn and adapt fast to demanding dances and performance environments. He has taught in various seminars around Europe during the last few years. Finally, he studies Contemporary and Ballet, realising their significant role in controlling your body and expressing your feelings.

During the last years we has been teaching a course called ‘Modern Folk dances’ and Baille de Barrio professional dance studio. Meanwhile, he has acquired education in audio production, and has his own professional studio (Acoustic Vibe Studios). He plays the lute (Cretan & Mainland) having taken part in plenty performances around the world and having followed seminars from many distinguished artists.

Alexios Tzemis was born in Athens, Greece. He started dancing at the age of five and he did his first dancing steps at the Hellenic Center of Folklore Studies (EL.KE.LA.M.). He also studied Economics at the Athens University of Economics and Business (Greece) and has acquired a Masters degree in Finance from Tilburg University (The Netherlands).

He has participated in numerous performances all over Greece and abroad, taking part in many international dance festivals and competitions and having been awarded (as a group member) with many prizes. Additionally, he has participated and collaborated with many other Greek and non-Greek groups. Furthermore, Alexios Tzemis studies ballet and contemporary dance and has also participated in contemporary dance performances. He has taught Greek dances in Denmark, Greece, France, Switzerland etc.

Furthermore, he is working as a professional musician, focusing mainly on Greek traditional music. He plays Gaida (bagpipe), Clarinet and Tsabouna and has participated in many concerts all over the world (Canada, Greece, Denmark, Switzerland, Cyprus, Hungary etc.). He was member of the music bands of Dimitris Korgialas (Greek pop singer) and  Michalis Tzouganakis. Finally, he has recorded in many CD productions.

TELL US MORE ABOUT YOUR PROJECTS

You may contact us for any projects that you might be interested. We will be more than glad to help you organise your next workshop, or performance, record new music pieces or perform at various events. You may also contact us for more information about our upcoming shows and trips.

In 2019 we did the first ever professional tour from a Greek group in France presenting our new project “SUR LA ROUTE DES BALKANS”.